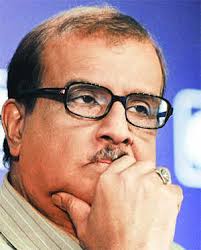 Sri. K.M.Chandrasekhar entered the Indian Administrative Service in 1970. He was ranked third in the list in the batch. Prior to that, he did B.A (Honours) in Economics and M.A. in History from St. Stephen’s, College, University of Delhi. After entering Government Service, he got the degree of M.A. in Management Studies from the University of Leeds in United Kingdom.

Sri. Chandrasekhar spent the first 25 years of his career in Kerala, holding such positions as Managing Director of the State Civil Supplies Corporation. District Collector, Idukki, Director of Fisheries, Principal Secretary (Industries) and Principal Secretary (Finance). During this period, he was also Chairman of the Spices Board under the Ministry of Commerce, Government of India. Some significant career achievements during this period include the establishment of Maveli Stores for the first time; setting up Onam Fairs and Id Markets and Christmas Bazars; establishment of Matsyafed; commencement of a scheme for enhancing capacities of fishermen using traditional boats, setting up a marine enforcement unit; organizing the establishment of the Spices Board by merging the erstwhile Cardamom Board with the Spices Export Promotion Council; organizing the first ever Spices Fair, which in subsequent years became the International Spices Congress, now a permanent and important feature of the world spice calendar.

In 1996, he left Kerala on Central Government deputation and rose to the position of Union Cabinet Secretary. As Cabinet Secretary, he was Head of all the Civil Services in India and reported directly to the Prime Minister. He retained that position for four years. He retired from Government Service in 2011 at the age of 63, having served Government for 41 years.

During his 15 years tenure with the Government of India, from 1996 to 2011, he was Joint Secretary in the key Trade Policy Division of the Ministry of Commerce, Deputy Chief of Mission in the Embassy of India, Brussels and the Ambassador and Permanent Representative of India in the World Trade Organization in Geneva. While in Brussels, he negotiated with the European Commission the Framework Agreement for the first ever Indo-European Union Summit, which was held in Lisbon in 2003. As Ambassador to the WTO in Geneva, he is credited, jointly with Brazil, with the formation of the G-20 group of nations, consisting of large and small developing countries including China, South Africa, Egypt, Thailand, Argentina, Chile, Malayasia and others. This group has been functioning effectively as a unit ever since. He was instrumental in forming a developing countries’ group on non-agricultural market access. He took the initiative in forming a group on the so called “Singapore” issues (trade and investment trade and competition policy trade facilitation and Government procurement).

Returning to Delhi in 2004, he became the Union Revenue Secretary to whom the Central Board of Direct Taxes and the Central Board of Excise and Customs reported. During this period, he streamlined and modernized tax administration at the Central level and started new initiatives such as e-filing of tax returns; centralized processing of such e-returns; payment of tax refunds through refund bankers and introduction of simplified customs clearance systems. The tax-GDP ratio went up to a record 12% during this period. He also dealt with all tax and duty related issues pertaining to free trade agreements, preferential trade arrangements and tariff related issues, including anti-dumping duties.

As Cabinet Secretary, he dealt with a number of critical issues, such as the spate of terrorist attacks in 2007 and 2008, including the 26/11 attack in Mumbai, conceptualization and implementation of the Stimulus Packages to deal with the economic crisis of 2008 and 2009, ensuring that the Commonwealth Games of 2010 were successfully staged despite serious initial problems and dealing with a whole range of Inter-Ministerial co-ordination issues. He paid special attention to the problems of weaker States, such as the North Eastern States, Jharkhand, Chhattisgarh and Jammu and Kashmir and led groups of Central Government Secretaries to State Capitals to solve problems on the spot. Following the Mumbai 26/11 attack, he also headed a committee, consisting of the Navy Chief, Home Secretary, Defence Secretary and State Chief Secretaries to strengthen coastal security. He also introduced for the first time, the Performance Management and Evaluation System in the Government of India, which facilitates quantitative assessment of performance of Central Ministries and organizations against agreed targets on an annual basis.

Shri Chandrasekhar has considerable management experience having been associated – as Chairman, Managing Director or Member of the Board of Directors – of more than 40 companies in the public, joint and private sector. He has written several articles and presented papers. He has also been consultant to the Commonwealth Secretariat and to the UN Food and Agriculture Organization.

He has been appointed by the Government of India as President of the Institute Body of the Sree Chitra Tirunal Institute for Medical Sciences and Technology, Trivandrum. This is an Institution of National Importance set up by an Act of Parliament, under the Union Department of Science and Technology.

He has been selected as Distinguished Fellow of the international body, the Institute of Directors. He has been appointed by the Ministry of Railways, Government of India, and a member of a High-Level Committee for structural reform of the Indian Railways. He is the Chairman of Centre for Development Studies, Trivandrum (an autonomous institution founded by Prof. K. N. Raj), when the present Chairman, Dr Bimal Jalan, ends his tenure in August this year.

He has been appointed member of the Committee on Innovative Collaborations set up by the Government of India to examine projects of more than Rs.2000 crore in the public and private sector involving innovative financing. He also has published articles in The Indian Express, Times of India, Financial Chronicle, Economic Times and The Tribune newspapers on various aspects of administration and the economy.